Having the first “Portal” hanging on the design wall must have influenced the two pieces I started this summer. I meant to post weekly about my progress but got sidetracked as I worked toward a deadline for a Fiber Artists Coalition exhibit entitled “Wabi Sabi: Appreciation of the Imperfect.” which reflects the Japanese aesthetic centered on the acceptance of transience and imperfection. I felt the “portal” was transient since it appears to float and this piece would be a good candidate to enter.  I set about working on additional pieces for the show.

I continue to gravitate toward greens, grays and browns.  Probably because that’s what I see living in the woods.  At some point I noticed doors and windows in the constructs. I didn’t consciously plan them; they just happened.  Thus, Portals became a series: 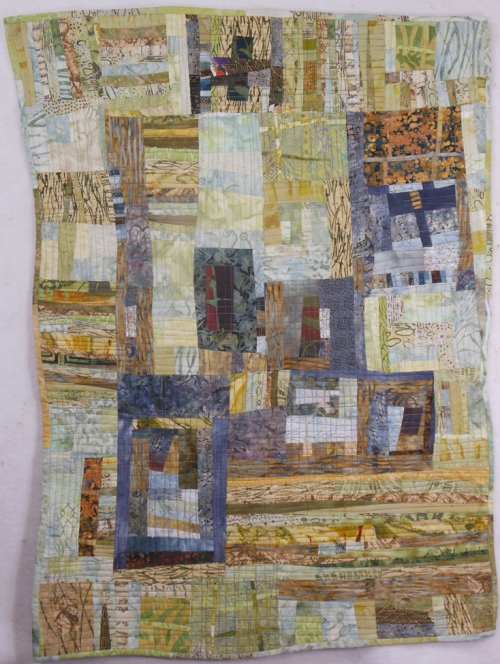 The next piece was more deliberate.  Two memories influenced the doorway and the branches obstructing entry: an abandon temple in a Balinese forest that has been taken over by monkeys, and the steps leading to a Mayan temple ruin.  I didn’t attempt to find my photographs since I was aiming for the feeling rather than a pictorial likeness. 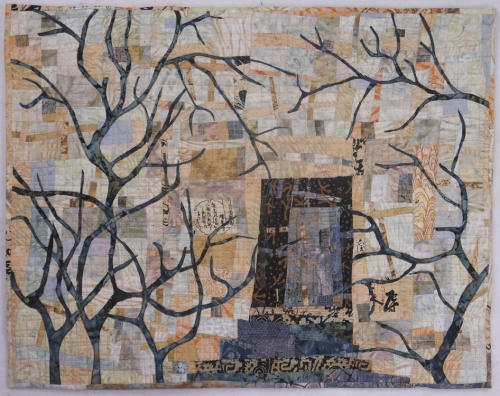 So now the first piece is renamed and also photographed with proper lighting.  All three will be exhibited together in Wabi Sabi.

And now I will turn my attention to the Blue Door.  Another Portal.

3 responses to “Portals Become a Series”